Can LEDs eat? Don't ask me, I haven't eaten yet. The Japanese invented the blue LED. Today, LED products have penetrated the Japanese food, clothing, housing and living. The following are examples of 10 products (technologies) invented by the Japanese, and 7 of them are the results of research and development in these months! We must go beyond Japan and come on!

Since the first research and development of the silkworm silkworm embedded in the jellyfish gene in March 2014, the Japan Institute of Agricultural Bioresources has made continuous progress in related research and invention. This GM silk looks green when it is illuminated by blue light through the orange filter. In addition, the institute has developed a fluorescent, fluorescent orange silk using the genes of coral.

The 28-year-old Japanese designer Morita Yukiko presented the LED bread lamp "Pampshades" in the recent "2015 Tokyo Designer Week". The name consists of "pan" and "lampshade". The former comes from Latin. The "panem" means French bread in French and the latter means "shade". The bread used in the bread light is also made of flour, salt and yeast. The built-in LED lamp is covered with a special plastic coating to keep the structure and appearance of the bread, while preventing the bread from decaying and damaging the LED lights inside. The bread lights are made in different sizes, including French stick bread lamps and croissants.

During his studies at Kyoto City University of the Arts, Morita Yukiko came up with the idea of making bread lights. She recalled: "When I was eating bread, I suddenly realized that I only ate it inside without knowing it, leaving an empty bread crust on my hand. At this time, the sun just passed through, and the transparent bread clam was like a lamp. It lights up like this. At this moment, I came up with the idea of making a bread light.” After making more than 300 prototypes, she found the ideal design, and the built-in LED lights would not burn the bread. However, the bread she used was not made by herself, but was made from a local bakery.

As early as 2011, Panasonic introduced the LED children's electric toothbrush EW-DS32. The price is about 5,000 yen (about equal to RMB 430). The body size is 18x20x160mm, and the weight is 35g without battery. In order to allow parents to see the development and clean-up of the children's teeth, the EW-DS32 is specially equipped with LED lights. The switch of the toothbrush is set on the back, and the LED light and the toothbrush are fully turned on with a single push.

This year's popular SUNSTAR new LED children's electric toothbrush, priced at about 240 yuan. The set consists of two brush heads + small mirror + toothbrush body, featuring LED lights, which can clearly see the teeth while brushing your teeth. The vibration frequency is 9000 times/min and the time is 2 minutes to completely remove the tartar. The small brush head is suitable for 6 months +, the large brush head is suitable for 2 years old +. A suit meets all the stages of baby-to-child use, helping your baby develop a good habit of cleaning teeth. 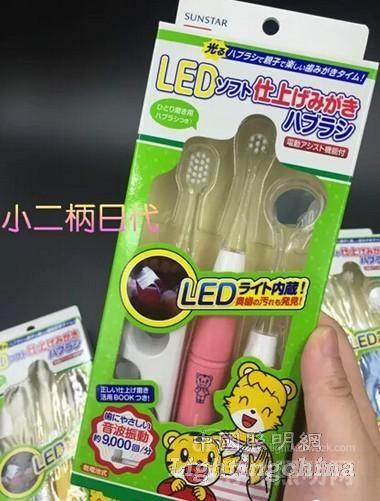 On August 7, Onkyo Corporation of Japan announced the launch of the industry's first ultra-long-life LED tube with 80,000 hours of electrolytic capacitors, with a power of 17 watts and a luminous flux of 2,100 lumens, with IP67 protection.

It is well known that the life of an LED lamp depends not only on the life of the lamp bead, but also on the life of the electronic device on the supporting circuit. The LED lamp released by Onkyo Corporation of Japan has abandoned the electrolytic capacitor that restricts the life of the LED lamp, so that the power supply life can reach 80,000. The hour is twice as long as the traditional one. At the same time, the two-stage circuit can control the ripple to 0.09, which greatly suppresses the generation of stroboscopic light and makes the light more uniform. In addition, the new ultra-long life LED tube is built-in power supply, eliminating the need for additional stabilizers or starters, saving installation time and labor costs.

In Japan, where there are some natural disasters such as typhoons and earthquakes, there is no electricity to use the normal lighting of the lights. In July, a Japanese lamp manufacturer issued a light bulb that can be brightened after a power outage. The price is RMB 300.

This special light bulb has a similar shape to a traditional light bulb, and the method is the same. The only difference is that a 200 mAh lithium battery is built in. After the light is turned on, it will charge the battery by itself when it is powered on normally. And maintain the state of illumination. Once a power outage occurs, it uses the battery's power to illuminate. It can last for 3 hours when it is fully bright and 6 hours when it is half bright. It is the only light source in the night when it is not visible, it can bring convenience to people. Intimately, the light bulb that can be turned on after the power failure can also become a flashlight, the handle can be telescopic, can be removed from the interface and used as a flashlight.

A magical weather box that perfectly presents the outside weather

In June, Japanese designer ken kawamoto demonstrated a magical weather box tempescope that mimics and presents the weather outside. Not only can the current weather be presented, but it can also be set to present future weather, and the weather data on the mobile app can be obtained through a Bluetooth connection and then presented. The tempescope magic box uses fans, condensers, pumps, light and hydrogen peroxide to achieve a variety of weather effects. Water can collect on top of the box and then drip to form a rainy scene, while the LED lights on the top of the box simulate lightning and sunlight.

It is said that in Japan, LED color beauty equipment is very popular, and many manufacturers compete for research and development. The principle is that LEDs emit visible light of different wavelengths for corresponding treatment to improve skin problems. The commonly used three colors are red light, blue light, and yellow light. 635nm red light (RED) has the characteristics of high purity, strong light source and uniform energy density. It is effective in skin care and health care treatment. It is called bioactive light and is usually used for damaged skin to promote accelerated healing. damage. The high-purity blue light (BLUE) at 470 nm matches the peak of light absorption of the porphyrin of the P. acnes metabolite, which can cause bacterial death and remove acne from the skin. The 592nm yellow light power has an active effect of accelerating blood circulation, activating cells, and stimulating cell excitability. It promotes collagen synthesis, enhances collagen fibers and elastic fibers of the skin, and has the effect of whitening skin to dilute spots.

On August 12th, Philips Japan announced the launch of the Ulminon LEDH4 headlight with fanless cooling technology. The new product can increase the brightness of the previous halogen headlight by 150%. The light distribution of the original brand of halogen headlights can be realized, and the light is effectively concentrated at the front of the vehicle while suppressing the light to diverge around, so that the road surface at night is illuminated more clearly. At the same time, by using advanced fanless air flux technology, it provides excellent heat dissipation to extend the life of the entire lamp. The color temperature is 6200K white, the power is 23 watts, the brightness of the high beam is up to 3200 lumens, and the brightness of the low beam is 2400 lumens.

The former LCD giant Sharp did not forget LED lighting when it fell to the edge of the collapse of the company's headquarters. On July 22, it announced that it would jointly launch the first solar LED mobile phone charging in Japan with Tokyo Metropolitan Communities and Tokyo. Station, free for international visitors to come to Japan.

The new solar LED lighting mobile phone charging station is 3.8 meters high, with 95 watts of polycrystalline silicon solar panels on the top, and the battery uses three 35-hour lead-acid batteries, which can meet the needs of 30 people according to the emergency charging for half an hour. The top LED light flux is 1000 lumens.

On March 11, the Japan Aerospace Exploration Agency (JAXA) said that the researchers used microwaves to wirelessly transmit 1.8 kilowatts of electricity (sufficient to start the kettle) to a receiving device 55 meters away. On the 12th, Japan’s Mitsubishi Heavy Industries announced that researchers have converted 10 kilowatts of electricity into microwaves and delivered them. Some of the power has successfully illuminated the LEDs on the receiving devices 500 meters away. This is by far the longest and most powerful power in Japan's successful domestic experiments.

Mitsubishi Heavy Industries said it will use the technology for space solar power systems (SSPS). The company plans to use the technology between 2030 and 2040 to transmit electricity from space power plants to the ground via microwaves. It is estimated that if a huge solar panel with a diameter of two or three kilometers is used for space power generation, it will be able to reach the power generation level of a commonly used nuclear power unit with a capacity of one million kilowatts. In addition, the technology is expected to be used in other fields, such as offshore wind power stations to land transmission, transmission to areas with difficult natural conditions, and wireless charging of electric vehicles.

It seems that the thinking of Japanese invention and creation is very open! In fact, the field of LED application is quite broad! China's LED has a long way to go! The development model of LED lights only according to conventional ideas seems to be narrow, it is difficult to open new markets, it is difficult to turn LED technology Push to a new height.

Previous: The Chinese Academy Of Sciences' New Tools For Ocean Fishing Can Reduce The Energy Consumption Of Fishing Boats By 70%.
Next: Sanya Launches Night Lighting Lighting Project To Create The Most Beautiful Coastal Tourist City